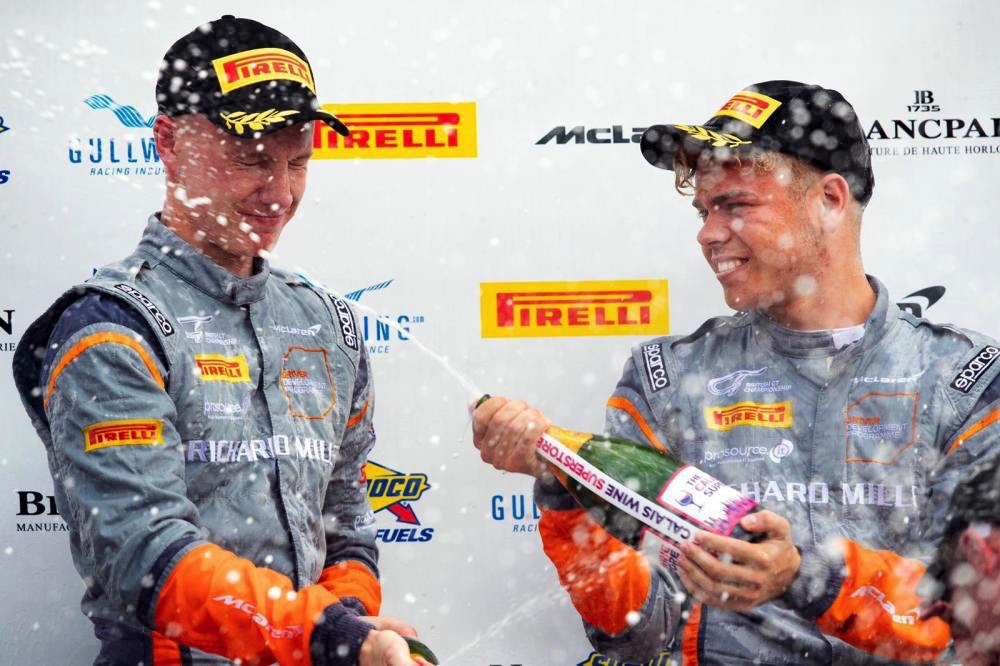 Heading into the weekend the duo had been leading the last three race weekends, only to be hit with issues that would force them to retire, this weekend was set to be different…

Starting from fourth place on the grid in the #4 Tolman Motorsport McLaren 570S GT4, Smith made a good start, making up a position to third place on the opening lap.

A safety car period closed the field up and after the pit stops, Dorlin would emerge second place in the race as he continued with the strong pace that Smith had shown in the opening half of the race.

With 20 minutes to go the class-leading car suffered brake failure at Paddock Hill Bend, promoting the #4 McLaren into the class lead as it passed the stricken car at Druids.

As the clock counted down it the nerves were high in the pit lane; thankfully this time the luck had changed, Smith and Dorlin would march on to claim their maiden victory by 0.463.

Smith and Dorlin are now fifth in the GT4 Drivers Championship, 33 points behind the championship leaders. With 37.5 points up for grabs at the season-closing Donington Park, there is still a mathematical chance of championship glory.

“I was confident going into the race as we have started from around fourth place plenty of times this season, and managed to be into first or second place by the first lap. So I expected us to be in the podium battle by the end of the first lap.

“The win felt amazing, but it is something that we felt like we should have had a long time ago, and we only now got what we deserved.

“After the run of bad luck, we’ve had this year I didn’t crack a smile until the car came out of the last corner to take the chequered flag. I felt physically sick up until then just hoping we crossed the line.

“The race weekend was strong from start to finish, our pace was good on old tyres in testing but I felt like we struggled to get the most out of the car in qualifying, but James and I did a good enough job, as for the race it couldn’t have gone any better.

“We head into the final round with a mathematical chance to win the championship, while it is most likely unrealistic, anything is possible in GT racing.

“The goal is to get in the top 3 in the championship and finish as well as we can in the race and just show our outright pace and what we are made of to finish the season on a high.”

The British GT Championship will head to Donington Park for the weekend of September 14/15.