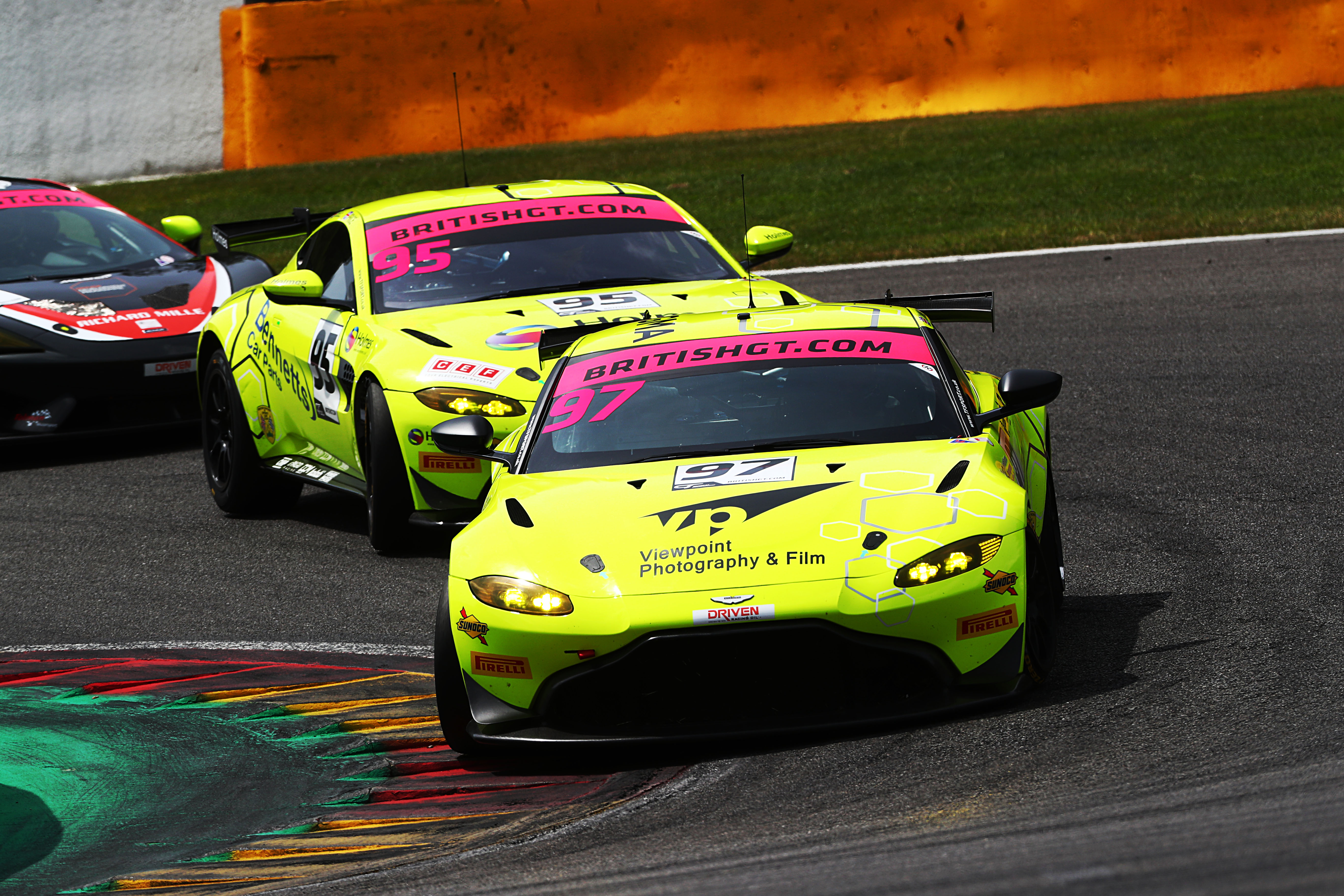 Come race day and Hand took the first stint in the Vantage AMR GT4, brilliantly working his way up to second place on the opening lap, with the sister TF Sport car following closely behind.

The 25-year-old would keep a strong pace throughout his stint, only losing one place before the pit-stops and driver changes.

With Canning now in the driver’s seat, the #97 Aston Martin emerged back on track in second place.

Towards the closing phase of the two-hour race Canning was lapping quicker than the leading McLaren and by the penultimate lap was threatening a move to take the lead.

On the penultimate lap heading into the Bus Stop chicane, Canning jinked to the left of the McLaren, taking the outside line, and putting himself on the inside for the next left-hand corner. The McLaren unsighted moved across and made contact.

As the pair moved out of the way for one of the GT3 cars Canning was now in the lead, while the McLaren was forced to retire with radiator damage.

One lap later and the #97 Aston Martin AMR GT4 took the chequered flag claiming not only the first class win in five years for TF Sport, but also their first-ever double GT4 podium finish.

The result moves Hand and Canning to within seventeen points of the GT4 championship lead, in third place. The duo leads the GT4 Silver class drivers’ championship as the series heads to Brands Hatch on 3-4 August.

“We went to Spa-Francorchamps a few weeks ago and completed a test. Just going there and being at somewhere so iconic, where there havebeen so many famous races and so much history, it is just a special place to be. So, to go there and take the victory make it even more special.

“Everything went well for us from start to finish, we worked really hard to make sure we could go into the race weekend and win.

“We had no other option really, other than to win, we needed the points in terms of championship.

“Because there is such a large gap in points between first and second, and second and third, we knew that we had to take the full points from the weekend, and that’s exactly what we did.

“We were so committed to taking the 37.5 points and so focused on the goals that we set out at the start of the season, that we wanted to be in the lead of at least the Silver championship by the end of Spa.

“So to go and do that is just an amazing achievement, to actually execute the plan and meet your goals that you set out to do earlier in the season,It’s nice, and its put us in a great position for the rest of the year.

“To have someone like Nicki Thiim in the team, he’s a very special driver from all angles, you look at him compared to the other drivers on the grid and there is no one else that does the same sort of job as him.

“He goes out of the box and sets the fastest time straight away, he’s committed with his overtaking, he’s just a different breed of driver.

“So, to have him to lean on at race weekends is an amazing thing to have. You always know that if you go to him for advice, it’s always going to be good advice as he’s been there, he’s done it, and he’s done it well.”

“I’m very happy with the GT4s and it couldn’t have gone better. They had strong pace all weekend and after some bad luck this year, it’s excellent to have them both get a deserved result.”