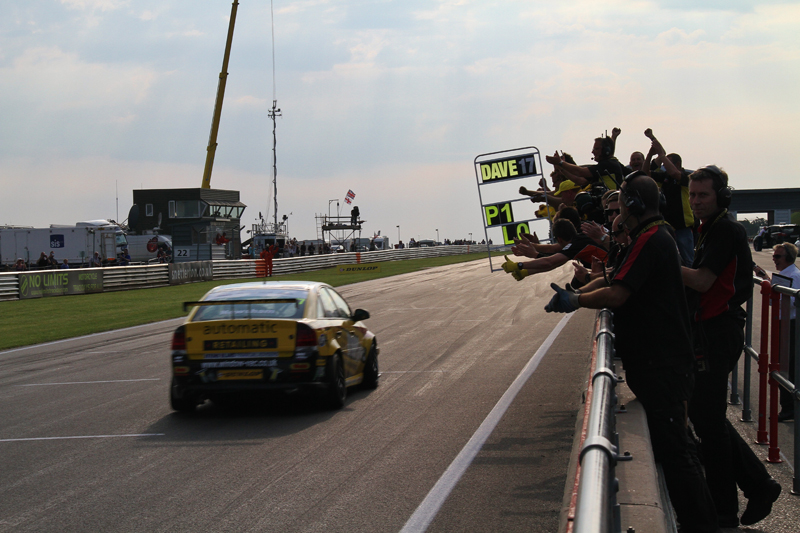 12 August 2012 will be a day etched in Luton-based Team ES Racing history as Dave Newsham took his and the teams’ maiden victory in the Dunlop MSA British Touring Car Championship at Snetterton.

The weekend didn’t start ideally for Newsham when he retired from the first practice session early with radiator problems, but he soon made up for lost time as he qualified third place just 0.054 seconds from pole position.

Race one saw Newsham drive a strong race to finish fourth only to be disqualified after stewards deemed the car to be underweight after a miscalculation with fuel.

Newsham had it all to do again in the second race as he started from last on the grid, his steady pace saw him move up through the field to finish a strong eighth place, securing second place on the grid for the final race of the day as 9 was drawn for the reverse grid.

After initially losing out to the BMW of Tom Onslow-Cole at the start Newsham pushed hard to build the pace and take back his second place by the end of the first lap. His pace would prove relentless as he found a gap to pass Lea wood in to the hairpin for the top spot, from that moment Newsham never looked back.

“I thought we might be able to do something like this this weekend if everything went in to place. We had great pace in qualifying and practice, no testing in between the last race, it’s just awesome isn’t it.” commented Newsham after the race.

Team mate and team principal Chris James suffered a disappointing weekend that involved delaminated tyres in qualifying, broken driveshafts and a number of collisions where James was hit from behind. Despite his own disappointment James was delighted at the performance of Newsham to take his team the top spot of the podium.

“We always believed we could do it but believing and it turning in to reality is two different things. What an up and down weekend for the whole team with Dave being disqualified in the first race and three DNF’s from myself we ended the weekend as a BTCC race winning team” said James. “The team have turned out a quality car and with Dave in the driving seat the whole package comes together.”

Team mananger Andrew Dean added “Well done to all at Team ES racing after another ‘character building’ weekend – under sometimes trying circumstances Dave and the team got the result that we knew we were capable of at the media day back in March.”

The British Touring Car Championship (BTCC) was formed in 1958 and is Britain’s most popular motor racing spectacle. Its race season comprises ten events at top circuits across the UK. It is contested by professional racing drivers in competition versions of every day road cars, giving it tremendous public appeal. Some 366,000 watch the BTCC trackside each year. It is also receives widespread UK TV exposure on the ITV network with all ten race events broadcast live on ITV4, ITV4 HD and www.itv.com

Dunlop is one of the world’s leading manufacturers of high and ultra-high performance tyres with an impressive track record of motor sport successes. Dunlop’s extensive racing experience has led to innovative technologies for tyres designed for everyday motoring. Always looking to maximize driving pleasure, Dunlop offers all types of motorists the performance and durability of the latest tyre technologies, including tyres with RunOnFlat technology, which is fitted to award winning vehicles such as the Mini, BMW One, Three, Five Series and X5. Many of the world’s leading vehicle manufacturers including Alfa Romeo, AMG, Audi, Bentley, BMW, Jaguar, Lexus, Mercedes-Benz and Porsche fit Dunlop as standard. Official Dunlop website www.dunloptyres.co.uk